There was a village smithy located at the west end of Pump Lane. The buildings are still there, but now converted to residential accomodation. At either side there was land where animals were put while awaiting new shoes, but this is now built on. For many years the Stapletons were the smiths here, and the following images from the Richardson and Irene Ellis collections relate to that time. 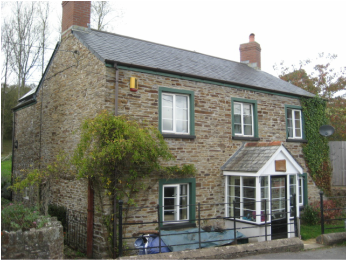 ﻿﻿Heart of Oak
The earliest reference to this public house is in 1841 when William Perkin is shown as a publican in the census return for that year, although the pub is not named as such. It may well have been in use as a public house before 1841 as the New Inn also appears in the 1841 census.

In the 1850 Post Office directory John Steer is listed as a victualler at the Heart of Oak, but at the 1851 census Barnabas Barton is shown here as both a publican and a labourer. He was born in Lincolnshire, but his wife was from Parkham, with 2 sons and three daughters all born in Abbotsham. He was still here in 1857 as he appears in Billings directory for that year, although he later became a farmer at Kenwith according to Kellys directories of 1873 & 1893.

By 1861 the census records William Clements at Heart of Oak as a carpenter, together with his wife and 3 sons. Presumably he was also the publican, as it was still in use as a pub in Kellys 1866 directory but under Thomas Pridham who went on to run the New Inn.

It was still a pub in 1870 when Morris’s directory has William Littlejohn from Hartland as a victualler here. William also appears here in the 1871 census, but only as an agricultural labourer, along with his wife, daughter and a domestic servant named Selina Bale. The 1881 census still shows William as living here with his wife and now 2 sons and 2 daughters. Selina Bale has gone, replaced by his sister Margeret as a general servant.

As William Littlejohn is only mentioned as a labourer in the 1871 and 1881 census the pub probably went out of use sometime between 1878 when it was listed in Harrods directory and 1891 as it does not have a mention in returns after 1881.

The building still exists, however, and is now a farm worker's cottage as shown in the photograph above.
﻿﻿
He had given up the license by 1856 as John Keys is then listed in the Post Office directory as licensee, but probably still lived in Abbotsham as Thomas died in 1899 and he and his wife Ann share a grave in St Helen’s churchyard.

The 1857 Billings directory lists the Inn as being in the charge of Samuel Bale, and the 1861 census has him as both innkeeper and labourer. He was from Alwington and his wife Mary was from Woolsery.  They had a son and 2 daughters, living here with a house servant Grace Jewell, also from Woolsery. Samuel had surrendered the license by 1871, but like the Holmans likely lived elsewhere in the parish as they are also buried in the churchyard, Samuel dying in 1888 and Mary in 1906  'a very old and much respected inhabitant of the parish' as the Bideford Gazette reported at the time.

﻿The Post Office directory of 1889 has Emily Pridham here, but by the 1891 census it was in the hands of yet another Pridham, this one being a Susannah but not the daughter given in the 1871 census as this one was listed as licensed victualler aged 73. She lived here with her granddaughter, Louisa Pickard, a dressmaker. Curiously, the 1893 Post Office directory reverts to Mrs Emily Pridham at the Inn. 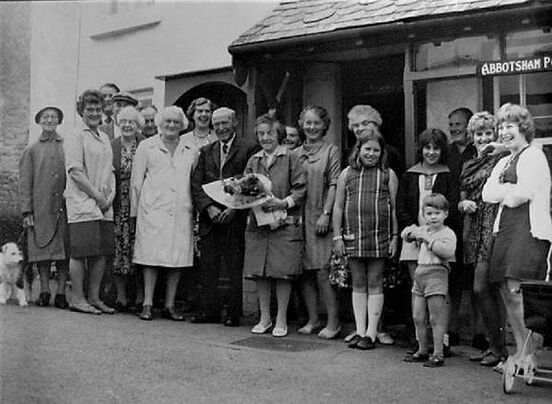 Mrs Ida Jane Dark took became the owner of the premises in 1941 and retired as sub-Postmistress in 1970 aged 70, although it is not currently known if she followed on directly from Edith Glover in that role.

​Abbotsham at one time had two Postmen as well as the Postmaster/Postmistress. One of the Abbotsham men who was killed in the first world war, Joseph Bale, was one of the village postmen and he is commemorated in the Bideford Postal District Roll of Honour which can be seen inside the entrance to Bideford Post Office on the Quay. Will James was a postman after WW1 where he lost his right arm at Ypres in March 1916.