These are the contents of the archives for St. Helen's Church

There may be some duplication of actual images in the above list. As time goes on and the
list is refined a more detailed index will emerge 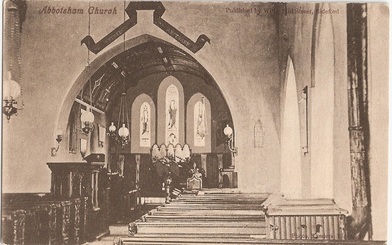 It is likely that there was an early Celtic Chapel on the high ground overlooking Bideford Bay on the north side of today’s Cornborough Road. The present day Church was situated inland, away from the risk of attack by pirates, but there is no record of its construction. The main structure of the Church dates almost entirely from the thirteenth century. The only exceptions are the porch, the vestry and the buttresses which date to the Victorian era. There is a suggestion that the buttresses could have been employed because the roof was rebuilt using slates rather than wooden shingles. The West Wall appears to indicate an earlier roof line with renovation on the corners during the Victorian improvements.

Tavistock Abbey and it's Links With Abbotsham and St Helen's Church 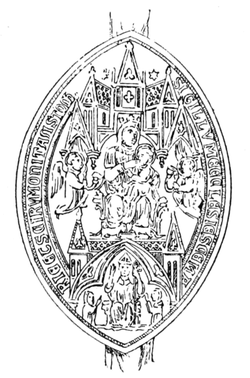 The seal of Tavistock Abbey
Tavistock Abbey was an Old English royal foundation established by King Edgar. Tavistock lay within the royal hundred of Lifton. From a reference in Alfred the Great’s will, and from later documents it appears that a substantial portion of the King’s demesne (his land holdings) in Cornwall was attached to Lifton for administrative purposes under an officer who bore the rank of high-reeve. In 974 the high-reeve was Ordulf, King Edgar’s brother in law. To him fell the task of supervising the beginnings of the new house. He was also expected to supplement the royal endowments from his own estates. Thus Ordulf and his wife Aelfwynn became major benefactors to the Abbey when it gained its charter from the boy-king Ethelred, Ordulf’s nephew, in 981.

A group of four holdings mentioned in the charter have been ascribed to Aelfwynn. These were the Abbotsham, Orleigh, Annery and Worthygate, for they are all in the vicinity of Alwington which is named after Aelfwynn, being ‘Aelfwynn’s tun’. Therefore in 981 Abbotsham passed from the ownership of the royal family to that of Tavistock Abbey but retained the name Hama or Hame, which is how it is described in the Domesday Book almost a century later. At this stage the local Church was not the responsibility of Tavistock Abbey but the endowment remained with the Bishop of Exeter. In 1184 Bishop Bartholomew of Exeter confirmed the endowment of the Church to the Abbey as follows.

To all the sons of Holy Mother Church likely to read this document, Bartholomew, by God’s grace, Bishop of Exeter, greetings in the Lord. Know ye that having considered the poverty of the monastery of Tavistock, .............................we do give, appropriate and, for the perpetual memory of the matter, by this writing confirmed, the Church of St. Helena of Abbedsham with all things belonging to them. In testimony whereof the seals of the Bishop and Chapter are affixed to this deed.

This confirms that by 1184 the name of the hamlet had already changed from Hama to one closer to today’s name, reflecting the ownership of the land by Tavistock Abbey.

Initially the income from St Helens at Abbotsham was appropriated to the Abbey sacristan to provide the Abbey church with lights. In 1246, when the sacristan had acquired an income from rents in the borough of Tavistock, the Abbot transferred the St Helens endowment to the Prior and convent. In return they should supply the refectory, cloisters and infirmary with hand towels and napkins, rather than the Abbot.   In 1265 the then Bishop Bronescombe of Exeter requested John Chub the Abbot of Tavistock to prove ownership of Abbotsham, together with other Churches. The Abbey’s ownership was indisputable but the Abbot ignored the request. The Bishop then sequestered all revenues and the cathedral proctor, supported by retainers of the Earl of Gloucester, raided the village removing livestock and selling off the tithe corn (10% of the total crop). Apart from this incident and a boundary dispute with Alwington there is no record of the village under Tavistock Abbey between 1184 and the dissolution of Abbey in 1539.The existing Church was built during the period when the parish was controlled by Tavistock Abbey but there are no records of when it was built.
A handwritten record book has been found titled Parochial Diary covering the years 1916 - 1960. The origins of the book are unknown. It is not a formal record of minutes or services but rather a collection notes on points of interest ranging from Armistice Days and Harvest Homes to Press cuttings of events in the village. There is much discussion of Insurance and the problems of damp entering the West Wall, topics which still tax the PCC tin the next millenium! The two files below are a transcription on the written record. The files are in Word format and the Find function in Word can be used to search for particular names if one is tracing ancestors. The Press Cuttings, service sheets etc. have been scanned in and are available at the Wednesday meetings  but the files are too large to be put on the site easily.